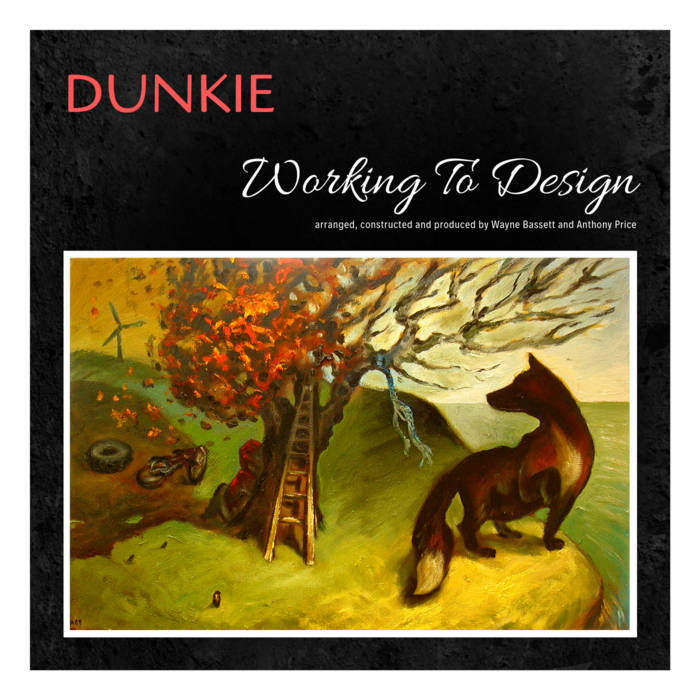 3mphhuw Superb songs backed up with amazing vocals and instrumentation. dunkie is a real lyrical genius.
Add to that, the amazing artwork of Michael Gustavius Payne.
I cannot wait for the physical copy to be released.
Put me down for one dunkie.

riversystemfan This is a work of art and I’m not talking about the the pictures. The whole package is just beautiful! Artwork, music and lyrics. It just goes to show that there is so much more out there than the top 40! I drather listen to this any day!

Adam Price I'm in love. So heartbreakingly bittersweet. Each song flows perfectly into the next but has its own identity and character. An absolute masterpiece.

All monies help towards funding the physical release of the limited x300 copies CD box set version of the album; this will include a 24 CD inlay booklet, the CD album/sleeve, dunkie merchandise (badges, stickers & magnet) and a CD demo version of the album.

Proudly presented by SWND Records, Working To Design is an album about time.

We dedicate this album to the memories and lives of our loved ones - no longer in our hands:

Every musician gave their own creativity to each song they appeared on; they created something uniquely beautiful.

We are truly thankful to everyone within SWND for believing in every second of Working To Design.

Anthony’s acknowledgements:
The album could not have been made without the help, encouragement and trust of every listed musician within this album.

Thank you for the love, the life and constant support of Theresa Duffner (my soul companion) and to our hearts - Jacob Price and Bailey-Zane Price (the two angels). My Mother (Christine Price), my Father (Brian Price) and my Brother (David Price) - my endless unconditional love xx

Paul Maskell & Karl James - in the words of Big Star, thank you friends - I wouldn't be here if it wasn't for you.

Gus - throughout this entire concept you have been supportive, from its initial seed of an idea you gave me the keys to your kingdom.
Your kindness and trust in allowing your paintings to accompany these songs has never been taken for granted. Thank you.

Wayne, finally, I am indebted to you, always - you approached me and heard something within the demos and offered your time, your support, your undying patience, and most importantly your friendship throughout this entire project.  Thank you.

A special thank you to the author Richard Matheson whose works heavily influenced and inspired the writing of many songs within this album.

A special thank you also goes to Annie the Studio Cat (we're sure you're within a track somewhere).

Can A Song Save Your Life?

I Think I’ve Been Asleep (All My Life)

A structured experience complete with atmospheric introductions, interludes and intermissions, ‘Working To Design’ demands to be heard in full" - Broken 8 Records

Track Name: ~ Introduction - So Little Time ~
So much to do, so little time
It’s nice to know you’ll wait a while

So many things to do with our lives
When I’m alone, I’m hypnotised

So much to say, so hard I try
But you next to me… a tear to my eye

(A tear to my eye)
Track Name: The White Hole
Writing all the wrong things I have done.
Fighting all attraction to succumb;
Repel.

When we get in what will we do?
The dead stay silent but are we immune?
This burning flare entices me,
I'm losing sight of verity;
Concede.

You ask yourself can a song save your life.

You ask yourself can a song save your life
Track Name: Rabbit Hole
You lay in bed and it swallows you up
Your lips imprinted on my coffee cup
The door-handle shows wear; you held so tightly
And I fell to despair...

Folding bedding alone and I crumble inside
I’m finding pieces you once used to hide
A locket of your hair; is held so tightly...
I fall in despair...

Tumble and fall, this rabbit-hole is funnel-webbed and soaring
I fear I’ll never reach this endless horror
I fold upon myself...
Another pill dissolves; I’m crawling faster to the edge
To the edge for you

I’ll hide behind the garden tree
I’m watching me, you’re watching you
And the words don’t come...
The words don’t flow easily (they don’t flow easily)
Track Name: I Don't Wanna Die In Minnesota {Part II}
Waking up is such a strain again, I know, I hear you
And incoherent thoughts replaced by stale monotony
Drift away from this world. No white dove, albatross steers you
What we need are all units to plebiscite and end this s**t
Sugar Plants & aeroplanes; a specula and shades of grey
A playwright and a golden fleece, the only hope immanent peace

I don’t wanna die in Minnesota
All liberties lost and the walls move in closer
“When I need you to jump I’ll give you the order!”
Dead diaries day to day - for how long do I stay?
I’m afraid to spend my life down in Minnesota

Push the button, swipe your face again, all features faded
A catabolic primordial state; another casualty
Papier-mâché platoons required, cover your tracks with funeral pyres
You could be that one unit to self-destruct and end this s**t
Pocket boroughs & monkey frames, broken flowers and decayed graves
A soiled cubicle and mise-en-scene; an orange sucked no chance to wean

I don’t wanna die in Minnesota
All liberties lost and the walls move in closer
“When I need you to jump I’ll give you the order!”
Dead diaries day to day - for how long do I stay?
I’m afraid to waste my life down in Minnesota

Everything’s eventual, everything’s a compromise
All is asked, contextualise; don’t destroy or diminish
Polemicist or activist, delusional illusionist
Tick, tick belie, from nothing to a cyst

I’m afraid I’ll live my life down in Minnesota
I’ll live it for today, with the time ticking away
Let my soul slip away down in Minnesota
Track Name: I Think I've Been Asleep (All My Life)
Do something right, do something wrong
Embrace a little love into your arms
Turn it into dreams
What does this all mean?

Never knew your life, never knew you long
Regretting all the silence now that you’re gone
What a fool to be
Blind faith and empathy

I think I’ve been asleep for all my life
Track Name: ~ Intermission - An Ode To A Flea ~
An orange ribbon tied around
3 shades of coloured wheat
I cannot read the words written down
I still hear your feet

Echoing upon the floor
Walk towards me
The lights fade in and fade back out
Sombrely...
Track Name: (W.A.L.L.S.) Within A Little Love Song
(So I’m) just looking for a quiet place
(But there’s) distractions all around
(It really) shouldn’t be this difficult
(But it is) to dampen this beautiful sound

(Within a love song)

And I apologise for every time that I failed you
And every time I lacked understanding that you deserved
And the patience and the kindness that went amiss
Well I’m sorry, and I thank you... for everything... my love

Thank you for blossoming day by day
Thank you bathing my sins and sores
How can I thank you anymore?
Thank you for remembering my love
Track Name: ~ Interlude - Choke ~
The pressure overhead
Walls closing in
Memories of the daffodils
And the silence in the room
And I choke...

Whispers through sleep
Breathing to a beat
Panic to find the words
And the scream within the room
And I choke...

The mundane of routine
A touch sears the skins
Bluntness of the cold blade
And the tears they begin... again
And I choke.

Pushing
Slipping
Track Name: The Kaleidoscope ~ Refraction
Taking the world from my hands
Spiralling I fear I’m falling
Changing the words from your mouth
Refracting into broken pieces
Lifting my soul with your smile
Kaleidoscopic eyes I’m drowning
Holding you tight in my palm
And having to let go……

The blinding of sight from the tear
Frozen in a passing moment
Replacing the half with a whole
Plunging and then reappearing
Attaching a nerve by your touch
Shuddering the pain unfolding
Craving to hold and to heal
And never letting go...
Track Name: 71-41-11
As the mourning Son ascends
All I think of is the ending
Did it fade or was it sudden?
I know it’s pointless on deciding

71-41-11
Track Name: The Memory Tree
I… am so heavy hearted
And I… remember a time
I was lifted upon… your shoulders celestially high

(A tree made from memories and full of love)
Track Name: Through Endless Eyes
We’ve travelled on through a life we once knew
We’ve taken our place in time
All we have left in this space we once filled
Is the emptiness in our minds

(The love I hold for you)

Leaving me asking why...
Track Name: ~ Closure - 1972 ~
I have been found, and I have been lost
I’ve felt the earth unbound
I’ve taken all I can from the love of my land

Bandcamp Daily  your guide to the world of Bandcamp

Featuring Oakland sounds from the Smart Bomb collective and Samplelov.